Before we go any further on mobile crane stability, we need to look at the mobile crane itself. Pulling it apart and looking at how the crane is constructed gives us a different perspective on balance than looking at the machine as a whole. So, lets de-construct it.

The carrier, chassis or carbody is the under carriage of the crane and depending on the type would typically include the carrier cab, wheels/tracks, outriggers, etc. It is designed for transporting the rotating crane superstructure. The CG will vary on the carrier depending on the direction of the boom. Although the CG does not really change, the location of the CG with respect to the center line of the mounting is affected by the direction the superstructure is moved. When the boom is in line with the length of the carrier, the CG of the carrier is forward of the rear axles. When the boom is perpendicular to the length of the carrier (such as when operating over the side) the CG is in the middle of the carrier’s width.

It is not uncommon for a truck crane to use the leverage of the carrier’s length to help stabilize and gain capacity of the rear of the machine. But, when you swing over the side you lose the carrier’s increased leverage, resulting in lower ratings. The same reasoning applies to rough terrain (RT) cranes. Some manufacturers provide greater ratings over the front of an RT because they gain the leverage of having the rear mounted engine to stabilize. 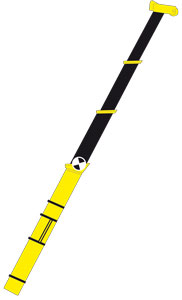 The third component to consider is the boom. They have a CG too. However, as you increase or decrease the length of a hydraulic crane boom, you change the boom’s CG. A lattice boom crane’s CG will remain unchanged, unless a jib or other ancillary item is added. When we add into this mix the variable of boom angles, you can see that as a boom raises and lowers through an arc, the booms CG moves closer or farther away from the tipping axis. When you couple the hydraulic boom characteristics of extending and retracting with the movement of the boom through an arc, you have the recipe for a tipping accident.

Next week we will take a look at how the components of the crane and the principles of balance and leverage come together to safely lift with stability. Remember Safety through Education is more than our motto, it is our guiding principle. We look forward to sharing our knowledge with you every week and enjoy hearing how you are using this information in your daily duties.