As we’ve discussed earlier in this series, it would not be safe to operate a crane that didn’t have reserve stability. It would be like hoisting 2,000 pounds with a sling that is known to have a breaking strength of 2,000 pounds. So, the industry developed a suitable “margin of stability” that is applied to all cranes. In its most basic sense margin of stability means, for areas of operation that are limited by stability, there must always be greater leverage on the crane side of the tipping axis than on the load side of the tipping axis.

U.S. Manufacturers must adhere to the American Society of Mechanical Engineers (ASME) standards in their design and fabrication of mobile cranes. These standards provide an acceptable stability rating and outline the reserves a crane must have to allow for the variables of operation. Although the reserve is not for the operator’s use, this factor does provide a margin between the actual tipping moment of the crane and the maximum safe rating of the crane within the area of stability. In the standards, the margin of stability is provided as a percentage of the tipping load.

What Does OSHA Say?

OSHA makes a couple of important statements about crane ratings which govern crane design and use. From 1910.180(c) and underlined by Crane Tech to indicate important points:

“The margin of stability for determination of load ratings, with booms of stipulated lengths at stipulated working radii for the various types of crane mountings, is established by taking a percentage of the loads which will produce a condition of tipping or balance with the boom in the least stable direction, relative to the mounting. The load ratings shall not exceed the following percentages for cranes, with the indicated types of mounting under conditions stipulated in paragraphs (c)(1)(ii) and (iii) of this section.” 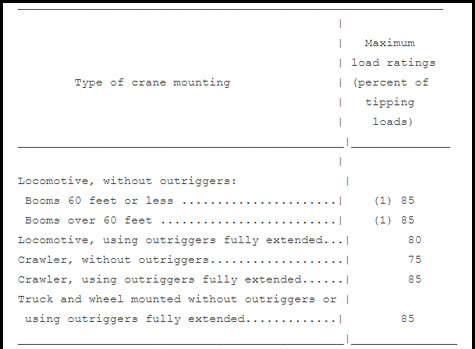 Taking a closer look at the important terms in the OSHA standard, there are a number of statements made that will help make this clearer. 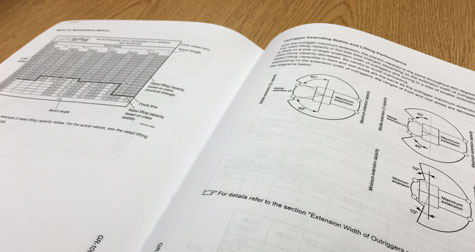 Looking at the Load Chart

While it is imporant to know that the maximum load ratings exist,  when operators look at a load chart they are reading a rating that has the reserve stability built in–they don’t have to make any allowances for the reserve. Capacities in a load chart are either based on stability (to keep the crane from tipping) or structural (to keep the crane from receiving structural damage).  A combination of methods may be used to indicate stability ratings. Some manufacturers place these ratings below a bold line on the load chart. This is typical of a hydraulic crane’s load chart. Others use an asterisk (*) beside structural ratings or they place structural ratings in a shaded area; this indicates all other capacities are based on stability.The key takeaway is to READ THE OPERATOR MANUAL AND FULLY UNDERSTAND THE CRANE’S LOAD CAPACITY CHART BEFORE LIFTING.

So now that you know how gravity, balance, and leverage work together to keep a crane stable, how the crane is made, what the tipping point is, and what the standards and OSHA say, in our final installment we will apply what we’ve learned by looking at some examples of crane configurations and where things went horribly wrong, resulting in a tipping accident.  Stay tuned next week as we wrap our Mobile Crane Stability Series up.