In the final post of this series we will discuss the threat of hurricanes and the impacts in the material handling industry. While tropical storms and hurricanes can be destructive and cause a wider path of destruction than a tornado, they can also be anticipated. They allow time for planning and preparing sites for the storm and the aftermath.

While we normally think of the wind being the most life threatening factors of a hurricane, it is not. Instead, the large amount of water the storm generates (storm surge/flooding/rain/surf) account for 82% of deaths. While not tracked by the National Oceanic and Atmospheric Administration (NOAA), accidents within the clean up and recovery efforts, such as falling tree limbs, slip and falls down stairs where there is no electricity, driving accidents from washed out roads and improper usage of generators, gas grills, etc. are also contributors for lives lost after the storm passes. 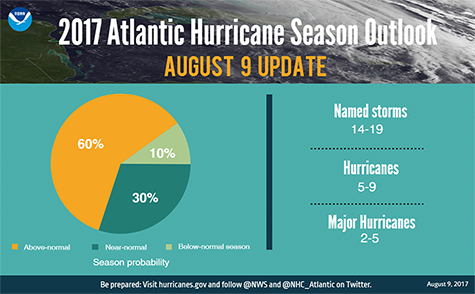 For the eastern Pacific and Central Pacific hurricane basins NOAA also predicts an above-normal season (which includes cyclones) for each region, however these storms do not impact land as often, as they move west-northwest across the cooler waters of the Pacific they lose their strength.

While we are already in the middle of the Atlantic season, another interesting item to note is the peak of Hurricane Season. The season started June 1, but it is clear historically the closer we get to early September, the risks increase dramatically.  So you still have time to prepare if you haven’t already.

Preparing for the Storm

As with all the types of weather conditions, you must start with a plan. The best ones are developed BEFORE there is even a storm on the way. The good news is that with hurricanes and tropical storms, there are usually several days to prepare both a work site and personnel’s homes. Plans may be staged with time frames, such as general preparedness tasks at the beginning of the season (getting emergency supplies on site) and 72, 48, 24, and 12 hour checklists to secure the site when a storm actually threatens.

Once it looks like a storm will be passing close enough to have an impact (remember rain and storm force winds may be felt hundreds of miles away from the center of the storm), it is time to follow your plans to mitigate damage not only from the wind, but the threat of standing rain water, or storm surge. Preparations prior to evacuation may include: 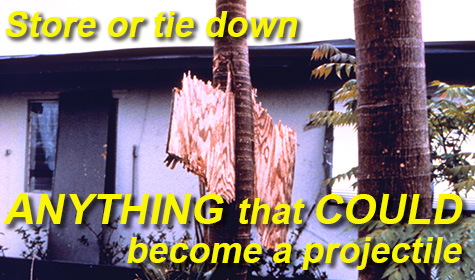 When the storm passes, the water recedes, and the local officials confirm it is safe to return to the site, it is key to access the damage with caution. This could include items such as:

Once the site has been inspected, identify and document any damage, and prioritize repairs. With a safe plan of action in place, then repairs can be initiated with a small team of individuals. When ready for the site to be re-opened, implement the plan to inform employees to return to work. As always, whether at work or home, use the proper safety precautions when operating generators, chainsaws, or other power tools and take steps to prevent heat illnesses and dehydration.

Remember, Safety through Education is more than just Crane Tech’s motto it is our guiding principle. Protecting lives so that they can return to their family and back to work is as important as getting the work done. If you need training related to material handling services, contact us at 800-290-0007.

For more information on Preparing for the Storm check out these links:

To read previous articles in this series, check out Adverse Weather: Lightning, Heat, and Tornadoes.