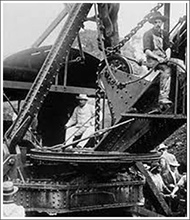 This photograph of President Teddy Roosevelt at the Panama Canal in 1906 hung prominently in our late founder’s office as long as anyone can recall. Charlie “Doc” Collier would wait while visitors examined the photograph’s detail then joined them in a smile of pride at the sight of Roosevelt; wearing his signature Brooks Brothers white suit and Panama hat while sitting on what must have been a very greasy Bucyrus Erie steam shovel. The picture inspired Doc and reminded him of the inexpressible reality of an untrained workforce. When Doc sold his home to finance the start-up of Crane Tech, his goal was to create a business that would stem the tragic losses continuing to plague the 1970’s workforce. Crane and rigging accidents were costing industry billions each year through material losses and wasted downtime. Doc’s vision was to bring safety to the men and women working in the field by educating them to recognize hazards and teaching the skills to work safely and efficiently. This photograph kept Doc focused and helped sustain his drive and the drive for those who hoped to work very long at Crane Tech. Doc was a people person and a driven man who believed in his vision; that all men and women can put in a good days work and return safely to their family at the end of each day.

The photograph keenly depicts an ambitious nation rushing to solve a great world problem, and symbolizes all that is good in the American workforce. But, Doc saw the true cost of the Panama Canal; the photographs of toiling and injured men not taken, the devastation from an undisciplined workforce, and well-meaning workers unprepared to recognize the dangers inherent with construction activity. This photograph reminded Doc that for every fifty miles of canal length more than five-hundred workers died. Doc would say; “Workers is just too matter-of-fact.” “We’re talking about fathers, brothers, husbands and young men.”

World War II and the Korean conflict gave Doc a personal look at human tragedy. He would remind you that the devastating loss of lives between 1942 and 1945 was not restricted to the battle field. Heartbreak was compounded on the home front where more than 2,000,000 disabling or deadly industrial accidents occurred each year supporting the war effort. More than 75,000 American workers died or became permanently and totally disabled from industrial accidents during the war. When the numbers were tallied, there were six industrial casualties for every one war related casualty, and some historians put the number as high as 8 to 1. Certainly more died in battle, but the numbers were staggering, and a new safety movement began to take foot in the U.S.

After military service Doc worked as an insurance underwriter inspector, honing his skills by inspecting large plants, public utilities, and industrial facilities. To Doc it was always about training, and when inspections turned up problems he taught operations and maintenance to strengthen safety and reliability.

Then it happened. In the late 1960’s Doc developed and delivered the first third party commercially available mobile crane and rigging safety training program in the U.S. for a major refinery in Louisiana – and a new industry was born. A demand for training was driven by new OSHA regulations released in 1971, and in 1976 Doc asked his family to trust him, sold his home, followed his passion, and created Crane Tech.

Under second generation leadership Crane Tech remains the most respected crane and rigging training company in the United States. With a logo drawn up on a kitchen table, and a third generation now honing their skills, Crane Tech is the reliable source companies turn to for material handling safety and skills training. After all these years we continue to follow Doc’s simple creed; “Be honest with the customer, give till it hurts, and never compromise your integrity.” Some pretty good words to live by.

Thanks for visiting our site. We look forward to the opportunity to serve you. And, by the way; Teddy still hangs prominently in our offices.

Have Questions? We're Happy to Help!

Send Us Your Questions