In Part 1 we took a high-level look at mobile crane stability, now its time to bring it back to the basics.

A mobile crane is built around the design principals of balance and leverage. In short, a crane must be capable of lifting heavy loads, through the use of leverage, while remaining in balance.

Before we dig into these concepts, we need to talk about gravity. We know from Newton and Einstein that the natural phenomenon of gravity is alive and well, all you have to do is drop a small object on your foot to be a believer. In material handling, we have to consider the Center of Gravity (or CG) of a load. The “center of gravity symbol”, illustrated by the black and white circles on the illustrations below is used to show the location where an object’s CG lies. The CG of any object is said to be the point in the object where the weight is evenly distributed. Meaning the leverage on one side of the object must be equal to the leverage derived by the other side of the object.

Now let’s look at a balance beam, which is similar to a basic crane model. The beam, balanced on a fulcrum, remains in balance as long as the leverage on one side of the fulcrum is equal to the leverage on the opposite side of the fulcrum. If either of the weights placed on the beam is larger than the other, the beam will tip in the direction of the heavier object. The only way to keep the beam in balance is to move the fulcrum closer to the heavier object, as illustrated below. By moving the fulcrum, the beam remains in balance and each object counterbalances the other.

Now let’s apply this to a mobile crane. In the illustration below, the right side of the balance beam is raised up, much like the boom of a crane. As long as each object’s leverage remains equal, the beam remains in balance. 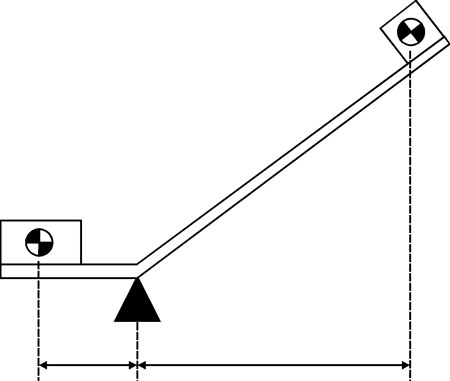 Now let’s take it a step further and suspend the load below the beam like it would be from a crane. In the illustration below, the beam can remain in balance if the leverage derived from each object remains equal. This example is great, as long as nothing changes, but we know this is not likely to happen. As soon as the weight of the object on the right is increased (like picking up a heavier load) you must compensate by increasing the leverage on the left side of the beam. If the object on the right moves closer to the fulcrum (like retracting a boom), you must compensate by decreasing the leverage of the object on the left side of the beam. 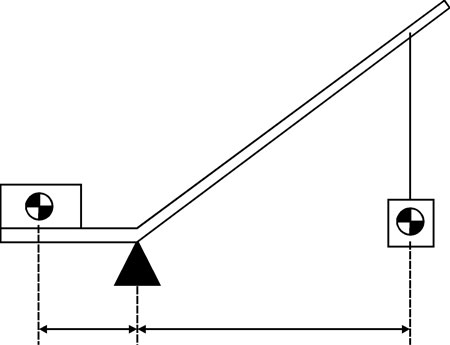 While these examples show how balance is derived, we know a crane must be able to remain in balance under a variety of load changes, radius changes and other factors which influence balance. In the field we think of balance as “stability”—and the ability for a crane to stay stable while accomplishing the task at hand is the end goal.

Stay tuned next week as we will take a closer look at how the components of the crane translate into the crane’s stability load ratings, followed by the next segment on how balance and the crane work together to lift safely.

We’d love to hear from you, please don’t hesitate to leave a comment.