Part 4: Mobile Crane Stability – Adding It All Together 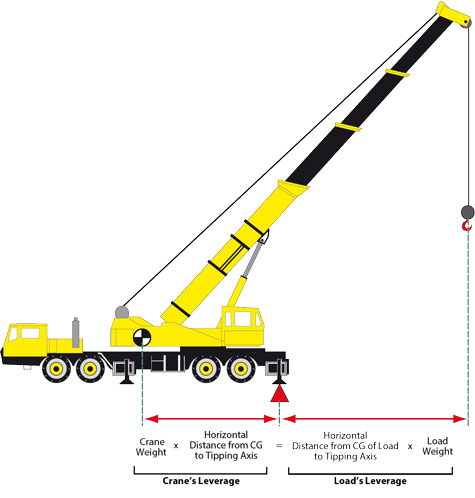 In the crane field, the fulcrum of the balance beam is replaced by the term “Tipping Axis” and we call the center of gravity the “CG”. The equation above illustrates how a crane is similar to a balance beam. However, when working with cranes, and one side of the equation equals the other side of the equation, the crane is considered to be in a balanced condition and tipping is ready to occur at any moment.

It would be unsafe to operate a crane where the load’s leverage was equal to the crane’s leverage, so “Reserve” stability is built into crane stability load ratings. Reserve stability can be best illustrated by looking at a crane that has hoisted its maximum safe working load in the area of stability. 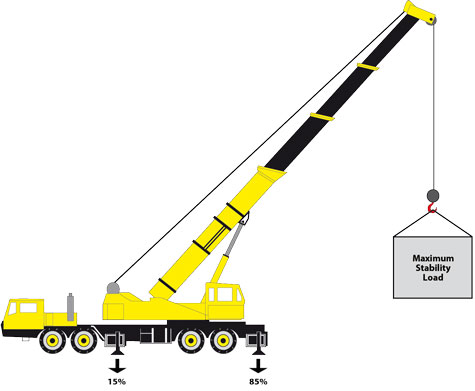 For this example, we can use a typical hydraulic truck crane, which is based on a maximum rating of 85% of its tipping load. When the crane hoists its maximum load, the outriggers closest to the load support 85% of the crane and load weight. The crane can remain stable, because there is a reserve of 15% of crane’s leverage positioned on the outriggers farthest from the load.

A mistake made by many is that a crane can lift more load than is indicated on the load chart. This is absolutely incorrect and the capacities in the load chart should never be exceeded. The example below shows a crane that is overloaded or the load’s leverage is greater than the crane’s leverage. If the weight you attempt to lift is too great, the crane will tip or turnover in the direction of the load. 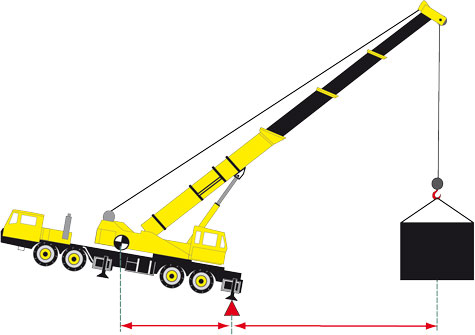 A good rule to remember is: If the crane could safely lift more load than what’s shown on the load rating chart, the crane manufacturer would not only have put that information there for your use, they would have charged more for the crane!

Stay tuned next week for more about margins of stability and what OSHA has to say and the following week we will look at some tipping illustrations and some unfortunate incidents where tipping occurred. In the meantime, let us know if you have any questions.

2 Responses to “Part 4: Mobile Crane Stability – Adding It All Together”